I have just finished one of the most moving, beautiful, poignant, intelligent and thought-provoking books I have read for a long time. The fact that Jimmy Corrigan: The Smartest Kid on Earth is a comic book which won The American Book Award and The Guardian First Book Award in 2001 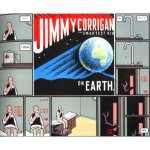 would suggest of course that I am not the first to recognise the delights of this ‘semi-autobiographical work of fiction’ as the author Chris Ware calls it, but I cannot recommend it highly enough for the fine detail of its artwork and the authenticity of its exploration of the complex relationships between a son, his domineering mother and his estranged father. The use of colour and tone, as metaphorical representation of  bland new consumerism, would be worthy of a seminar in itself.

Set in Chicago and some of the bleak backwaters of the American mid-west in the middle years of the 20th century, the central character seems doomed to replay for ever in his mind every mundane detail of his life, as well as the range of alternatives he imagines for himself if only things had been different, occasionally losing hi 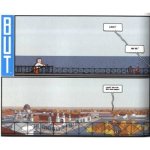 mself in the fantasy world of his superhero alter-ego, complete with mask and cape. Introverted, neurotic, bullied at school and at home, Jimmy’s (or Ware’s) observations, and the sharp wit with which he delivers them, suggest that with a grand sense of irony, he may indeed be one of the smartest kids on earth.

This is how the book, which started out as a weekly comic strip in the ‘New City’ newspaper, was described by one review 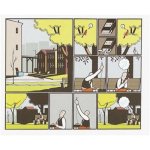 “Jimmy Corrigan is further set apart by Ware’s visually stunning, two-dimensional artwork, where simple characters are drawn against painstakingly detailed backdrops, and an overall creative layout that utilises more traditional uniform panels, full-page vistas, draughtsman diagrams and cut-outs, among other things. With the flashbacks and disjointed narrative, Chris Ware shows a remarkable command of the comics medium, elevating Jimmy Corrigan far above its peers. More than just a great graphic novel, this is a classic in any medium.” 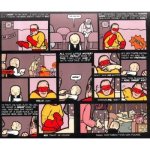 The Smartest Kid on Earth has been compared to the Pulitzer Prize-winning Maus, and while the scale of its tragedy is local rather than global, the scope of its achievement is immeasurable.

*NB Due to the use of ‘adult’ language the book would probably be deemed unsuitable for study in school for anyone other than the most mature reader.

However, for a list of comic books and graphic novels suitable for 10-14 year old readers click on the Books 10-14 tab at the top of the page.

Advertisement
There’s nothing kids, or indeed adults, like better than rummaging through a box of old photographs – not sure whether ‘rummaging’ through Flickr will ever be quite the same as a shoe box – but as a stimulus for creative writing a carefully chosen photograph is hard to beat, especially where it has a personal connection. Of all the writing I have encouraged youngsters to produce over the years, by far the most successful was personal writing, especially if it involved photographs from home. The huge success of social networking sites such as MYSpace, Facebook and Bebo, as well as the phenomenal number of blogs added daily to the global collection, are testimony also to that need we all have to create our own narrative in the world, to ‘tell our story’ in one way or another. 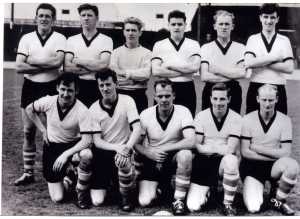 The Minishant team which won the Scottish Amateur FA Cup in 1960. Centre-forward Robert (Rab) Boyd is in the centre of the front row.

The power of photographs was once again brought home to me this week when I opened up my copy of the local Ayrshire Post and there on the sports pages was a picture of my dad’s 1960 Scottish Amateur Football Cup winning team, Minishant. I don’t remember ever seeing that particular photo, which was submitted by John Robertson, one of the surviving members of the team, and since my old man died twenty three years ago at the ridiculously young age of 52, it’s unlikely that I would ever have seen it otherwise. I was always a great believer in attempting to write anything I ever asked kids to write, so if you’d like to read my essay on Big Rab, as he was affectionately known, click on Slim Jim and the Big Man.

Further Ideas for Using Photographs in the Classroom

Talk: Ask kids to bring in a photograph which has a special significance to them, and tell the story in two minutes.

People in Pictures: Gather a selection of photographs of people. Issue them randomly to members of the class and ask them to ‘create’ the character – age, nationality, backstory, etc. This can be followed by developing a story where the character is the narrator or a character in the story.

Reading Pictures: A good exercise for teaching young people about the ways in which photographs can be manipulated to tell a story from a particular perspective. Use the cropping tool in PowerPoint to focus on a particular detail. In each subsequent slide gradually reveal more of the picture and discuss at each stage ‘what the photograph is about’.

Front Page Story: Follow on from the last exercise, this one is for older children. Present them with a collection of photographs and the text of a news story and provide a template for the front page of the newspaper. Divide them into two groups and ask them to cut the story to fit the space. Works well if the two groups are given different remits in terms of editorial stance, readership etc. Writing captions teaches the importance of anchorage in meaning.

Story in Six Pictures: Find six photographs, put them in a particular sequence, and write or tell the story. It is worth trying it with a random selection of photographs, with the challenge of making the connections, as well as choosing six photographs on a theme. If you like this idea you should also have a look at the dedicated discussion group ‘Tell a Story in Five Frames (Visual Storytelling) on Flickr.

Story in Six Words: The writer Ernest Hemingway was once challenged to write a story in 6 words. The result was “For sale: baby shoes, never worn.” Try the same exercise using a photograph as the stimulus. To see some really good examples – you’ve guessed it – have a look at the Six Word Story Flickr Group.

Powerpic: Use PowerPoint to create a narrative with pictures. To find out how to manipulate images in Powerpoint, add text and more have a look at these excellent training materials on the National Qualifications area of the LTS website.

Digital Narratives: Use digital images to create narratives with free online tools such as Comic Brush and Pixton and make comic strips from still images. Ollie Bray’s blog will tell you how. Another source of wonderful ideas is The Digital Narrative by Martin Jorgensen which will point you in the direction of everything you ever needed to know about creating stories from photographs.

Moving Image: Have fun by uploading a selection of digital photographs to RockYou and translate them into an animated slideshow or to Animoto where you can add your own soundtrack for a short video which you can re-edit as often as you like – ideal for recording classroom activities or events. To crop,edit, annotate or generally be creative with images I would recommend Picnik – fast, easy, fun and free!

With thanks to Ewan MacIntosh for many of the ideas in Story in Six Words and Story in Six Pictures. For more ideas on how to use digital images in the classroom, check out this great post on Ewan’s blog from March 2007.