Boys read. But not always what school provides.

Boys are more emotional than girls. So thinks Tony Little, the head of Eton school, who in a highly controversial interview this week, also claims that boys are being failed by a state education system which treats them the same as girls. Boys, he insists, are wired differently from girls: they are more competitive, need to be physically active and are incapable of multi-tasking. For that reason, Little argues, boys need to be taught differently, and the result of our failure to do so is a nationwide problem with disaffected teenage boys. Interestingly, the head of Britain’s most prestigious, and most expensive, single-sex school has been a passionate advocate of boys and girls being taught together, but he also believes that unless we take account of the differences between the sexes, many boys will continue to be labelled disruptive and fail to achieve their true potential.

Make of Tony Little’s comments what you will, but if we think about the issue purely in terms of reading engagement, I believe that many of our boys are failed by an inherent institutional bias. The popular misconception is that boys, generally speaking, are reluctant readers. I’m not convinced. I have a notion that the problem is more about the choice of texts than it is about the reader. It’s hardly a scientific study, but in my experience as a secondary English teacher, when given a free choice of texts, girls would normally opt for a novel, while boys more often than not would choose non-fiction texts. There were of course exceptions to the rule. The whole-class texts they studied did not reflect that balance however, consisting almost entirely of works of fiction. To compound the problem, in cash-strapped schools and departments, many of the texts were significantly outdated and often presented outdated gender stereotypes.

There was a solution to the problem. Occasionally, the common experience of a single text by a whole class is an enjoyable and worthwhile experience, but equally there is no reason why we should assume that in all circumstances a single text will be appropriate for twenty or thirty young people simply because they happen to be the same age and in the same room. A common outcome can be achieved by setting the same task for different texts. It’s more appropriate, it saves money and it proves that sometimes discrimination can be positive.

When the main objective of a school system is to prepare young people to pass exams, and when the achievement of that objective supercedes all else, including critical thinking and an enterprising attitude, then it is time to think again. Which is precisely what many schools are now doing, with the support of the Scottish Government, in developing the values, purposes and principles of Curriculum for Excellence. In a series of illustrative video clips produced in association with schools across Scotland, these values, purposes and principles are given flesh and bones, as young people explain for the benefit of parents and others the advantages of a ‘project-based’ curriculum, where they have the opportunity to work together in finding solutions to real-life issues. Here, the young students from Biggar High School are learning about International Trade. Many other fine examples of enterprising learning can be found on the Scottish Government website. 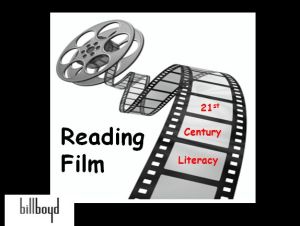 Pope was making his way across Scotland yesterday from Edinburgh to Glasgow, I was journeying – slowly – in the opposite direction to the City of Discovery. The Dundee Contemporary Arts centre was the venue for my CPD session Reading Film:21st Century Literacy.

for Scottish Screen (now Creative Scotland) on using short films in the classroom, as well as being a taster for the upcoming Discovery Film Festival, Scotland’s international film festival for young audiences taking place in the city from the 16th of October until the 3rd of November.

brings together some of the best new films from around the world, and the Schools’ Programme provides special screenings, guest appearances, workshops and gala events.  An excellent collection of free classroom resources to use alongside some of the films is also available from the Discovery website. Last year almost 8,000 young people enjoyed the cinema experience, and if last night’s audience of dedicated teachers is anything to go by, the spirit of discovery is very much alive and well in Dundee.

For the past couple of days I have been distracted by the latest collection of writing from the man the New Statesman calls ‘the most accomplished essayist at work in Britain today’ – Clive James. In The Revolt of the Pendulum he demonstrates once again the ease with which he moves around his subjects, whether they are from popular culture, academic obscurity, or somewhere in between. It’s when examining the use of language though, his own and that of others, that he is at his most entertaining and illuminating, two qualities which the best teachers realised long ago often go hand-in-hand.

In ‘Insult to the Language’ James argues that the quality of English prose writing is deteriorating rapidly, especially in the ‘quality’ British journals, through a combination of bad grammar and general ignorance, especially of the origins of many everyday expressions or metaphors. ‘Usually when a metaphor slithers into imprecision, it is because the activity from which it was drawn is no longer current practice’, he writes. ‘Nobody gets the picture, because there is no longer a picture to be got.’ One example he offers is the expression ‘shot himself in the foot’, which originated from the desperate act of some soldiers in the First World War who believed that the self-inflicted wounds would exempt them from further action. Almost a hundred years later, the original association is almost lost, so that ‘shot himself in the foot’ has come to suggest clumsiness rather than cowardice.

In another of the essays, ‘John Bayley’s Daily Bread’, the author talks about ‘those desperate commentators, omnipresent now in our multiple media outlets, who must always advance an outlandish opinion because they don’t write well enough to make a reasonable opinion interesting.’ Ever mindful of avoiding the same mistake himself, he steps back from the precipice of outlandish opinion to offer the reasonable opinion, a practice that anyone learning or teaching the art of discursive writing would do well to observe:

‘The language has always changed, so to protest looks reactionary. If there were no reactionaries, however, deterioration would become galloping decay. In reality decay does not gallop, but we all know what a horse is even if we have not ridden one, so everyone realises, so far, that ‘galloping’ is being used metaphorically. When all the horses have gone, ‘galloping’ will just mean ‘rapid’…….The typical prose of the present has no past. Whether it has a future remains to be seen.’