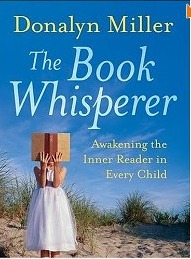 The English Education Secretary Michael Gove caused huge controversy this week (not for the first time) when he boldly proclaimed that every 11 year-old should be reading 50 books a year. Let us give him the benefit of the doubt, and assume he meant ‘wouldn’t it be wonderful if all 11 year-olds read 50 books a year’. The problem is that he has no idea how to bring that about, or even how to begin to encourage such a scenario, and being part of a government determined to close public libraries certainly isn’t going to help. The clue to his thinking is in the word ‘should’ and in the arbitrary choice of 50 as a target number of books. Is it based on the notion of one book per week with two weeks off for good behaviour? The ‘should’ of course is based on a model of education which is centred on instruction, telling young people what is good for them, rather than fostering a real love of reading, which takes time, dedication, a fairly detailed knowledge of the individual child’s likes and needs, and a love of reading on the part of the teacher.

If anyone with access to Mr Gove happens to read this post, perhaps next time you see him you could lean over and whisper in his ear the title of The Book Whisperer by Donalyn Miller. Were he to add this to his reading list – assuming he himself reads at least 50 books a year – he might begin to understand the effort and dedication it takes on the part of those teachers who are already developing young readers and pay them a bit more respect. However, if he is determined to turn young people off reading for life simply by imposing targets, here are a few more pieces of advice he might give any teacher trying to create reluctant readers:-

This week I dropped in on the Amble GPX Project in Northumberland to see how they were progressing ahead of the official launch in July. When I arrived they were busy preparing to take their place the following day at the Alnwick Tourism Fair, a perfect opportunity to market their product and explain to the wider community exactly what a ‘geolocation treasure hunt’ is. Great progress had been made since my last visit in August 2010, and despite a number of frustrations with the software, the website has been

well and truly established. Next week a number of trails are being piloted, with invited guests of all ages being used as guinea pigs over the routes. Their feedback will be invaluable as the final routes and clues are put in place over the coming months. As the official ‘literacy adviser’ to the project, what struck me was how much the young people have matured since my first visit way back in December 2009. As Anna, the project leader, described it so aptly, they have now taken control of the project and are demonstrating leadership skills. Where, in the beginning, people would wait to be told what to do, they are now taking the initiative and doing it their way, because they know how they want it to turn out and they all have a vested interest in its success. There is no better argument than that for project-based learning! 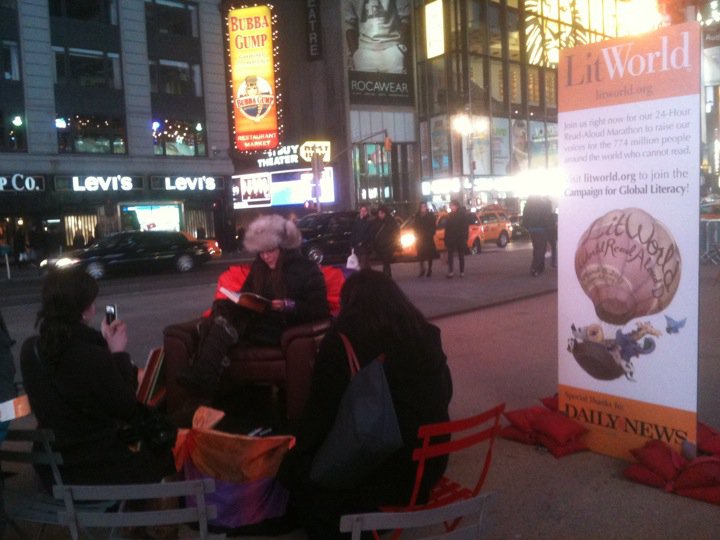 Pirate Bill briefs Captain Flint before his appearance on WRAD

Promoted by the fantastic WorldLit organisation, the aim of the event was to celebrate reading and to raise awareness of the link between illiteracy and poverty. Through the wonder of modern technology (Skype) and thanks to the ingenuity of  Angela Maiers of Maiers Education Services, I was able to contribute by reading to 4th, 5th and 6th Grade students in Douglas Road Elementary, Temperance, Michigan, Gottlieb Day School in Jacksonville Forida and Poughkeepsie Day School in New York City. But for the vagaries of the weather which gave the kids in Postville Iowa an extra ‘snow day’ off school they too would have had the dubious pleasure of a visit from ‘Pirate Bill’ and his introduction to one of my all-time favourite children’s books, Treasure Island.

“LitWorld’s mission is to cultivate literacy leaders worldwide through transformational literacy experiences that build connection, understanding, resilience and strength. We work with teachers, parents, community members, and children to support the development of literacy and the redemptive power of story in the world’s most vulnerable communities.” 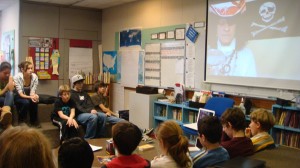 Kids in New York City tuning in to Pirate Bill 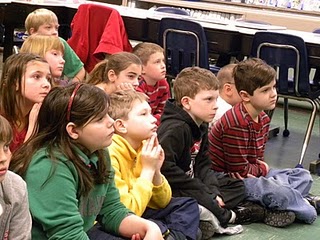 LitWorld  works with communities worldwide to identify and train local literacy leaders.  LitWorld Girls Clubs are running across the world, including in the United States, Kenya, Ghana, and Iraq, and the Resilience Project, writing workshops for children who have experienced trauma, is being launched in 2011. One of their other goals is to create access to both print and digital materials to help all children learn to read and write. LitWorld connects with publishers, including Scholastic and Penguin, to send books to their target sites around the world. They are also developing “Seven Strengths” picture books, written and illustrated specifically for children who would not otherwise have access to children’s literature. These resources draw on their belief that literacy is not just a responsibility and a necessity but a value and a joy.

I love books, and I love giving them away. Which is why I signed up early to volunteer as a ‘giver’ on yesterday’s World Book Night and how I ended up spending six hours tramping around the streets, cafes and pubs of my home town of Ayr giving away 48 copies of Life of Pi to complete strangers. The brainchild of Jamie Byng, MD of Canongate publishers and a controversial figure within and without the publishing world, the idea was that 20,000 volunteers across the UK and Ireland would each give away four dozen copies of a book, chosen from a pre-selected list of 25 titles, with a further 40,000 copies distributed to ‘difficult to reach’ places such as prisons and hospitals, making a grand total of 1 million books. Supported by television and with extensive coverage in the media generally, the overall aim of the event was to spread the word about reading and to set a million books on a ‘journey’ which can be tracked back to the original giver. Each book has been allocated a unique ten-digit number and the receiver is encouraged to register the number on the WBN website where he or she will subsequently be able to comment on the book before passing it on to someone else. The organisers put it like this:-

“At the heart of all reading lies a journey, a mental journey into the unknown that has the power to alter the passenger in the course of the travelling. The journey is indeed the destination and World Book Night seeks to celebrate the many journeys that books allow people to go on.” 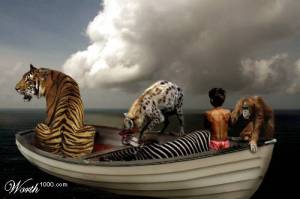 Despite having the approval of the Publishers’ Association, the Booksellers’ Association and the Independent Publishers’ Guild among others, the scheme has not been without its critics, not least those who say that it will only serve to make it more difficult for new authors to find an audience, or that it will result in people failing to understand the real cost of books. Some have suggested alternative projects, like author and blogger Nicola Morgan, who encouraged readers to buy a book from their local bookshop and write the inscription ‘Given in the spirit of World Book Night, March 5th 2011 and bought from [insert name of shop] – please enjoy and tell people about it’, before passing it on to a friend. A great idea, and something which I’m sure many readers, myself included, already do on a regular basis. If you’re passionate about books, it’s difficult not to want to share that passion with others.

As for my own experience on World Book Night, it made me have a fresh look at my home town, gave me an excuse to have some lengthy conversations with complete strangers, and left me with a great feeling of satisfaction to see the obvious pleasure the gift of a book can still bring to people in a sometimes chaotic world.

I would like to thank the owners and managers of Cafe Nero, Su Casa, Cafe Francais, Beanscene and Billy Bridge’s Bar in Ayr for allowing me to harass their customers during their busiest day of the week, especially in the case of the latter as my visit coincided with the television broadcast of the 3.30 from Doncaster.