I cultivated an extreme aversion to science at school. Or should I say, the way I was taught science at school left me completely cold. My memory of physics for example – and I know I am as capable of hyperbole in the interests of a good story as the next man – is of being set endless homework problems, along the lines of working out how long it would take a stone to reach the bottom of  a cliff if thrown from a great height. Call me an unwilling participant, but I couldn’t work up the enthusiasm to care, far less see the relevance of the problem. The fact that our textbook was called, without a hint of irony as far as I’m aware, Physics is Fun, only served to bolster my resistance.

Fast forward several decades, and along with a great many of the population, I have been transfixed recently with the apparent ‘discovery’ by Italian scientists of tiny particles called ‘neutrinos’ moving faster than the speed of light, and in the process upsetting everything we thought we knew about the universe since Einstein’s Theory of Relativity was – er, ‘universally’ accepted. Numerous eminent scientists have subsequently weighed in with huge doses of scepticism of course, which all adds to the fun (Best related joke so far: Barman says ‘we don’t serve neutrinos in here. A neutrino walks into a bar.)

My interest in the story was already primed, having recently finished reading Free Radicals – The Secret Anarchy of Science by Michael Brooks, in which the author argues that science has suffered over the years from a very safe and conservative image, with scientists portrayed through the mass media as dependable, rational and almost always correct, an image which Brooks claims is inaccurate and which has done science and science teaching little favour. Here is how he describes the situation in his own words:-

Then there is the issue of science education. How do we inspire the next generation of scientists? Since the 1950s, the public face of science has been dull, spiritless and cautious. Scientists have taken a back seat in society and culture, allowing rock stars, sportsmen – and women, and fame-hungry TV celebrities to win the attention of our children….If the high school students of today were permitted to learn – perhaps through scientists taking a more honest approach with the media – what science and scientists are really like, the days of a career in science being the dull, dismal road less travelled would be behind us.

There is also the problem of methodology: science teaching methods and curricula have also been the victim of the cover-up. Children have, by and large, been taught the letter but not the spirit of science. As the philosopher Rousseau suggested, we should not teach children the sciences, but give them the appetite for them.

It is open to question, for instance, whether students really need to learn all of the scientific information on the science curriculum. For most, it is an experience that seems to destroy any interest in science. And anyone who has done a school science practical will know how hard it can be to get results that the textbooks say they should. Why is this seen as a failing? Imagine if teachers were then allowed to use this experience to explain the challenges and rewards involved in making breakthroughs and discoveries, rather than having to press on to the point where the student’s notebook contains the ‘right’ answer. Science teachers have been unwittingly co-opted into the effort to conceal the true nature and spirit of science.

It strikes me that the new Scottish science curriculum provides teachers with the opportunities to do exactly as Michael Brooks suggests here. But then again, I’m not a science teacher, so what would I know. Any science teachers out there care to comment?

Since writing this post I have been directed to two exciting new, free, science teaching resources from the BP Educational Service.

There is a teaching resource for Primary called Young Science Investigators: Project Kit www.bp.com/bpes/ysiprojectkit,  which is a new interactive resource for pupils aged 7–11 that focuses on science at work in the real world and scientific enquiry skills through practical hands-on activities, animations, lesson plans, worksheets and teacher guidance.

Tomorrow, in recognition of International Day of the Girl, those great people at LitWorld are promoting Stand Up For Girls. Many girls around the world still find it difficult to access even a basic education, and two-thirds of illiterate people in the world are women. Please visit the LitWorld website and find out the ways in which you can help them make a difference.

Two thirds of all the world’s illiterate people are women. On September 22, we will stand up for girls and their right to go to school and to learn to read and write. Let us join together to launch a campaign to advocate for a transformative new era in girls’ education.
Every girl has the right to a quality education that will ensure she has a lifelong way to protect herself, advocate for herself, learn what she wants to know and be who she wants to be. Every girl has the right to read and write words that will change her, and to write and tell stories to change the world.

To round off my Australian trip I spent a few days in Sydney – or to be precise, in Richmond, about 50 miles to the north-west of Sydney. Of course, I visited the iconic city and took all the usual tourist pics, which I have used to create this Animoto video. If you have yet to discover Animoto, or even if you have been using it for some time, you may be surprised to learn that educators can apply for a free Animoto Plus account – for which private individuals like myself have to pay $30 a year. This allows you and your students to create stunning presentations – combining images, video clips, music and text – or to produce  videos which bring your lessons to life and show off your students’ work to the wider world. What on earth are you waiting for?!

To Launceston, Tasmania, and the purpose of my visit. I had been invited to deliver the final keynote speech at the New Literacies, Digital Multimedia and Classroom Teaching Conference, a collaboration between the Faculty of Education and the HIT Lab Australia (Human Interface Technology) at the University of Tasmania’s School of Computing and Information Systems. The conference was beautifully organised by Angela Thomas (@anyaixchel). Angela is a senior lecturer in English and Literacies Education at UTAS, whose research interests include children’s multimodal authoring, social semiotics and new media literacies. As well as making sure the event was running smoothly, Angela found time to present a workshop on Virtual Macbeth, the Shakespeare classic reimagined in Second Life, where participants could ‘explore the potential of virtual worlds for immersive, experiential and student-centred learning.’

Professor Len Unsworth of the University of New England in Armidale, Australia, and well-respected author of several texts on new literacies, opened the conference with a fascinating insight into the ways in which the point of view of the reader/viewer changes between picture books and their animated versions, using the Oscar-winning animation of Shaun Tan’s picture book The Lost Thing as the focus. The point was well made that while the books and their moving image versions ostensibly tell the same story, there are often important interpretative differences arising from the position and actions of the camera.

Later in the day, Martin Waller (@MultiMartin), a primary teacher and researcher from Holy Trinity Rosehill Primary School in England, shared via his keynote the ways in which social media have fundamentally changed young people’s engagement with literacy and meaning making in the real world. The great thing about this inspirational speaker and teacher is that he isn’t just talking about it, he’s doing it in the classroom, where his Year 2 class (that’s age 6) have their own Twitter presence. Martin is also fascinated by children’s popular culture and how this can impact on learning, and is responsible for the famous @ClassroomTweets. Definitely a name to follow if you aren’t already doing so.

Day Two of the conference and the opening speaker makes an immediate impact. Lalitha Vasudevan (@elemveee) is Associate Professor of 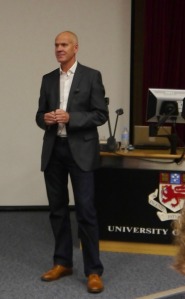 Technology and Education at Teachers College, Columbia University, and her stated interest is in how young people craft stories, represent themselves and enact ways of knowing through their engagement with literacies, technologies and media. Drawing on her experiences in New York with court-involved adolescents, and through the moving personal story of a young man expressing himself through rap music, she made a very powerful argument for the case that in order to move towards greater enactment of multimodal pedagogies, such that adolescents’ literacies cease to be seen as barriers to educational participation, we need to provide teachers with access to what the research findings tell us and with opportunities to engage, explore and enact these pedagogies in the teachers’ own contexts.

Given the quality of the speakers and workshop presenters, being asked to close the conference with my own talk, ‘New Narratives for NewTimes’ was an honour and a pleasure. The feedback was incredibly generous and there are already plans to develop the conference themes into a book for publication next autumn. I would like to thank publicly Dr Angela Thomas, Robert Ceperkovic for making all the travel arrangements, the lovely Damon Thomas (@DamonPThomas) for chauffeuring us around and showing us the beautiful Tasmanian countryside, and all the other great people we met during our stay, including Annemaree O’Brien (@AnnemareeOBrien), Paul Chandler (@pauldchandler) and the irrepressible James Riggall (@jamesriggall).

If you are on Twitter you can catch a flavour of the conference at the hashtag #UTASNewLits, and if and when the presentations become available online I’ll post the links. Next time: Aussie Adventures 3 – Postcard from Sydney.

Arrived in Tasmania ahead of the New Literacies, Digital Media and Classroom Teaching Conference this weekend where I’ll be sharing the

keynote platform with some interesting and inspirational speakers. You can see the full programme for the event here, and I understand that the talks are going to be recorded and uploaded to the UTAS website. Before arriving in Launceston however, I took the chance to visit some relatives in Adelaide that I hadn”t seen for quite a few years, and they took me on a tour of the wine-growing districts of Riverland and the Barossa Valley. Hard work but somebody had to do it. I thoroughly enjoyed South Australia and Adelaide in particular – beautiful city, great climate, fantastic parklands, bikes and bike lanes everywhere. Oh, and did I mention the wines and the seafood. Watch out for some photos when I get the chance to upload them. In ‘pretending to be working’ mode, I did also get to visit the great people of Renmark Primary School, where my cousin is the Principal, and share with them some ideas about developing multimedia literacies in the classroom. Even converted a few of them to Twitter so watch out for them on your social networks. Just had time before I left for a visit to Ned Kelly’s Retreat and some authentic outback tucker. No worries mate.