It is now almost exactly a decade since Scotland’s National Debate on the curriculum, the consultation which led to what is still universally referred to as ‘Curriculum for Excellence‘, but which should by now simply be called ‘the Scottish curriculum’ (see my previous post on the significance of the title here). It is perhaps a good time, therefore, to reflect on the general purpose of that review, especially for anyone coming into our education system for the first time, and that is exactly what this creative animation from the community learning group North Alliance invites us to do. The first half of the film reminds us of the need for change, and sets out the challenges for education in Scotland, which of course are no different from those in any other modern economy. However, there are some big questions which remain unanswered, and which need to be addressed by Education Scotland and the wider education community if the aspirations so well articulated in this short presentation are to be realised. I would like to consider just a few of them.

“Curriculum for Excellence is, firstly, a mission statement. It sets out a vision, and it gives Scottish Education a long-term sense of direction. It will not be implemented over the next few years.”

This is a very welcome statement; had it been made clear from the beginning that this was a long-term vision, much anxiety could have been avoided. I’m sure I didn’t just imagine the very clear timetable for ‘implementation’ from August 2010, which caused no little consternation in local authorities and with the Scottish Secondary Teachers’ Association, but which is no longer to be found (at least by me) on the Education Scotland website. As a mission statement, CfE is a highly commendable piece of work, but as the commentary acknowledges, it is not a ‘national curriculum’ in the traditional sense. The principle is established that it is not the role of governments to determine the detail of curriculum content, but rather to provide broad general purposes and themes within which the outcomes of the curriculum can be met. I happen to believe that this is right and proper, but it does have some serious implications.

Key Question. Who does have responsibility for determining the content of curriculum areas, and what criteria should they use in doing so?

“In the modern world, knowledge remains vital, but it is not enough. Success depends on deep understanding, and on having the skills to turn knowledge to useful effect.”

It is difficult to disagree with this contention, but the reality is that the secondary school curriculum is currently built around subjects and subject knowledge, the primary purpose of which is to prepare students for  National Qualifications at age 17, most of which are awarded on the basis of written examinations. Little evidence is required that this subject knowledge is ‘turned to useful effect’, only that it can be explained in theory. I wonder how different it could be if the curriculum was instead organised around the development of the key cognitive skills identified in the film – particularly problem-solving and critical thinking skills – rather than the traditional curriculum areas which have hardly changed in the past 50 years, and which were not, bizarrely, subject to review during the National Debate. I frequently meet and talk to teachers who are creative, and want to be more creative (that’s why they became teachers) but they are ground down by a regime of constant testing and target-setting by their ‘managers’.

Key Question. Is it possible to have a problem-solving or project-based curriculum while at the same time providing students with a core subject knowledge?

“Subjects are still important. Indeed, the structure of knowledge is perhaps more important than ever, but at the same time we have to remember that knowledge is joined up. The problems of life are seldom solved by using expertise from a single subject area alone. Being able to draw on different areas of learning and apply them together in the real world contexts is a vital skill.”

I have to confess that I have no idea what ‘the structure of knowledge’ means, but this point more or less acknowledges that real learning does not take place in subject compartments. It also seems to  imply that the the connection of the disparate parts of this complex jigsaw will somehow be put together by the learner at some point in the process, without the need for structural change. All the previous evidence from school inspections suggest that this does not happen, and that in fact young people find it extremely difficult to make connections in learning across curriculum areas.

Key Question. Is it possible to make radical changes to an education system while operating within the same subject structures which have changed little in the past 50 years?

“A surprise benefit of CfE development has been a new emphasis on learner engagement, the idea that the learner has to take responsibility for his or her own progress, and needs to be involved in all of the key decisions. This kind of active involvement in the learning process wasn’t a significant part of the original plan, but it has been enthusiastically taken on board by schools.”

I’m not quite sure why this should come as such a surprise, or in what way it wasn’t ‘part of the original plan’. The curriculum is described in terms of ‘I can….’ and ‘I have……’ statements, or to put that another way, in outcomes and experiences written from the point of view of the learner. If that doesn’t imply that the learner has primary responsibility for his or her learning then I have seriously misunderstood it. In fact, it was in this respect that I though the curriculum review was innovative and radical. In reality however, ten years later many young people are still unaware of what these outcomes are, despite the fact that they are freely available online. It may have been enthusiastically taken on board by some schools, but many others need significant support in making that transition.

Key Question. Is it possible to transfer the responsibility for learning to the learner (where it rightly belongs) while holding teachers to account for their students’ examination results?

“Nobody has yet made the breakthrough to genuine 21st Century practice. That is the task that faces us.”

Indeed. Is that because there are barriers to progress which only those in positions of authority can remove, or is it because, as a profession and as a nation, we are instinctively conservative?

Related: For an excellent analysis of the review of the curriculum in England see Is Character the Essential Student Outcome?

Last week I had the dubious pleasure of assembling some flat-pack furniture from everyone’s favourite value store, the ubiquitous Scandinavian giant IKEA. Like many of my contemporaries, I served my apprenticeship, in furniture-building terms, on the inferior British version, MFI, cursing and swearing with the best of them when discovering that the 16 2-inch screws required to complete the job numbered only 15 in reality, and that on completion the missing screw would make the difference between a sturdy family heirloom and a pile of kindling. It wasn’t entirely the fault of MFI, however, since back then I felt that the pictorial instructions were included as a bonus – a kind of first aid kit to be opened only in case of emergency – and that the whole thing was really down to male intuition and an innate sense of logic. Much experience and many years later, and heeding the words of Thucydides, as you do, that ‘few things are brought to a successful issue by impetuous desire, but most by calm and prudent forethought’,  I carefully opened the boxes and started to READ THE INSTRUCTIONS.

What I didn’t appreciate until well after the event was that the sense of achievement I felt on completing the job and realising that it could hold several books without reverting to its original state, has actually been identified and named by a group of American academics as the ‘Ikea Effect‘. In a series of experiments, Daniel Mochon, a marketing professor at Tulane University, along with his colleagues Dan Ariely of Duke University and Michael Norton of the Harvard Business school, demonstrated that people attach greater value to things they have built themselves. Building your own stuff ‘boosts your feelings of pride and competence, and also signals to others that you are competent’ apparently. I’m going to ignore the fact, for now, that the bookcase had actually been ‘built’ by someone else and only ‘assembled’ by me. Let’s not go splitting hairs when feelings of pride and competence are at stake. 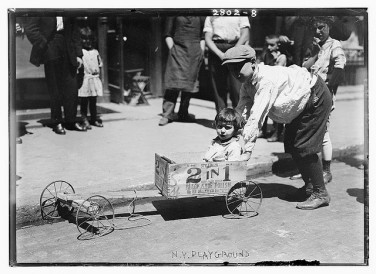 Now any English teacher in the land (of Britain that is) could have pointed to the story of Spit Nolan by the Irish-born writer Bill Naughton and said, ‘He told them so’. In this much-loved tale of working-class kids from the North of England, the eponymous hero, Spit, is without question the district’s champion trolley rider, the ‘trolleys’ being the carts or buggies made from bits of junk collected in the local scrapyard. Spit’s success is all the more remarkable for the fact that he is recovering from tuberculosis, a common illness in poorer areas of Britain in the first half of the 20th Century. Spit’s trolley has been lovingly crafted by his own hands, and he remains unbeaten until his friend Ernie appears with the Rolls-Royce of carts, assembled in his father’s factory by his engineering colleagues. The challenge is set – and the outcome in the balance – but the moral of the story is already making itself known to us, in flashing lights, in the words of the unlikely hero himself:-

“You own nothing in this world except those things you’ve taken a hand in the making of, or else you earned the money to buy them.”

Not everything about the Tulane report was positive however; it comes with a health warning. One of the implications of the Ikea Effect is that we tend to fall in love with projects we have spent a great deal of time working on, even when they are quite clearly failing, losing any sense of objectivity along the way. Which is why we need ‘critical friends’ who are prepared to tell us that in fact that shelf is not quite straight, or that lesson plan might just be a tad unrealistic.

“It’s a good reason — and this is true whether you are running a big complicated project involving millions of dollars or finishing a third-grade craft project — to have someone from the outside, who isn’t invested in you or your work, give you some objective feedback before you show your project to the world.”