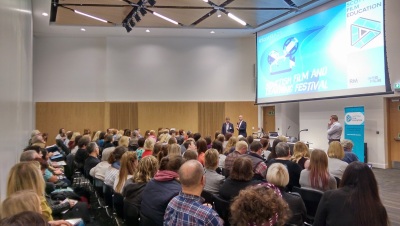 You know that feeling you get when you have been planning a big event for the past few months and suddenly it’s over? That’s how I’m feeling today, after a truly fantastic day at the first Scottish Film and Learning Festival in Glasgow on Saturday. The area around George Square really did have a festival feeling, as the Great Scottish (Children’s) Run was also in town, but not even the samba band immediately outside one of the conference venue’s seminar rooms could dampen the enthusiasm inside. For those of you who were not able to attend this time, here is the complete list of presenters and presentations. If you click on the title of the presentation it will take you to some further information or resources related to the speaker and/or the presentation topic. A big thank you to John Johnstone from Radio EduTalk who came along and captured some of the presentations, which you can hear by going to the EduTalk website.

Tim Flood – Draw What You See

Claire Docherty – Using the Scottish Film Archive in the Classroom

David Griffith – From Shots to Sentences