Here we are, a decade on from the launch of one of the most radical and visionary curriculum frameworks anywhere in the developed world, and sadly the focus of the mainstream media and the educational establishment in Scotland seems to be back on familiar ground – the lack of readiness of secondary teachers to ‘deliver’ the new National Qualifications to school leavers (STV News). It is an all-too-familiar scenario, and the language of ‘delivery’ tells you all you need to know about our continuing collective failure to turn the system around. I thought this recent tweet from one of the country’s top educational commentators summed it up rather neatly:

Sometimes in Scotland it feels like we launch boats and then refuse to sail in them. Need to make more of Curriculum for Excellence….

The Scottish Government claims to be fully committed to the vision of Curriculum for Excellence, yet sometimes I wonder if our politicians and their representatives in Education Scotland send out confusing signals  about what was designed to be a ‘seamless’ educational experience for young people between the ages of three and eighteen. Terms like ‘senior phase’ are used to justify the fact that, by the middle years of secondary school, and earlier in some instances, the development of the four capacities appears still to  give way  to relentless exam preparation. If the development of the four capacities in our young people really IS what we believe the purpose of formal education should be about – and the general agreement on that over the past twenty years or so seems to be holding firm – then we need to have the courage of our convictions and look at what is preventing that from happening. Shouldn’t we be spending more time and energy, for example, looking at how we measure that development? Technology has provided us with tools which make it easier for learners to record and demonstrate their own personal development – why aren’t we making more use of them and transferring that responsibility to the learner more effectively?

“Our approach to the curriculum sees it as a single framework for development and learning from 3 t0 18. The framework needs to allow different routes for progression from one stage of learning to the next, and promote learning across a wide range of contexts and experiences. It should equip young people with high levels of literacy, numeracy and thinking skills and support the development of their health and wellbeing. It should enable every child to develop his or her full potential through a broad range of challenging, well-planned experiences which help them develop qualities of citizenship, enterprise and creativity…As many schools recognise, the curriculum is more than curriculum areas and subjects: it is the totality of experiences which are planned for young people through their education – a canvas upon which their learning experiences are formed.”

A Curriculum for Excellence, Progress and Proposals, Looking at the Curriculum Differently. March 2006

Discussing this issue on last week’s Inside Learning podcast, I repeated my long-held belief that the brakes were put on the new curriculum almost from the start, when it became clear that secondary schools would be

expected to implement significant changes within their existing structures, when in fact it is the very structures themselves which should have been up for discussion, a point taken up by Professor Mark Priestley of Stirling University in two recent blogposts on the same topic.

“I wish to dwell briefly here on issues of provision. Addressing questions of fitness-for-purpose should also be about looking at systems and procedures, thus identifying barriers and drivers which impact upon the development of the curriculum. A prominent example of where this has not tended to happen concerns the secondary school timetable. Logic would suggest that a serious attempt to implement the principles of CfE would include a serious look at the structure of the school day. One might expect longer school periods for example, to accommodate CfE pedagogy. One might expect a serious look at the ways in which knowledge is organised in schools.  Disciplines and subjects are not the same thing, and schools should be looking at alternative ways to organise disciplinary (and everyday) knowledge, especially in the pre-qualification Broad General Education phase, where fragmentation is a problem (typically S1 pupils might see 15 teachers in a week). As Elliot Eisner (2005) reminds us, ‘There is no occupation …  in which the workers must change jobs every fifty minutes, move to another location, and work under the direction of another supervisor. Yet this is precisely what we ask of adolescents, hoping, at the same time, to provide them with a coherent educational program‘. Serious attention to such matters might include the systematic development of inter-disciplinary approaches, including hybrid subjects (integrated science, social studies, etc.).”

While I agree wholeheartedly with Mark Priestley’s observations, I don’t think ‘the systematic development of inter-disciplinary approaches’ goes far enough; many schools claim to be doing this already, and the evidence of impact is so far hard to find. For me, the problem is caused by having a ‘Broad General Education’ for three years of secondary schooling before reverting in the senior phase to the exam-driven scenario we are all too familiar with. Shouldn’t the whole of schooling be a ‘BROAD, GENERAL, EDUCATION’? As I said earlier, I think the crucial decisions were made with the publication of the Progress and Proposals document in 2006, which made it clear that the structures in secondary schools would remain largely unchanged. This was what launched the next phase of development, when outcomes and experiences were written by ‘subject-based’ groups of specialists. A much more productive next phase, in my view, would have been to tease out the ‘attributes’ and ‘capabilities’ of the four capacities (featured below) into a larger curriculum framework.

It could have been different, and it is never too late. If we are to make real progress in Scotland and re-establish our reputation for a world-class education system, we need to grasp the nettle, admit that our natural conservatism has not brought about the systemic changes we were looking for, and go back to the drawing board. This would be less an admission of failure than a further declaration that we do indeed have the courage of our convictions.

Whether you are working at school, departmental, local authority or national level, and wondering how you might re-boot the curriculum, looking again in some detail at the four capacities would not be a bad place to start. 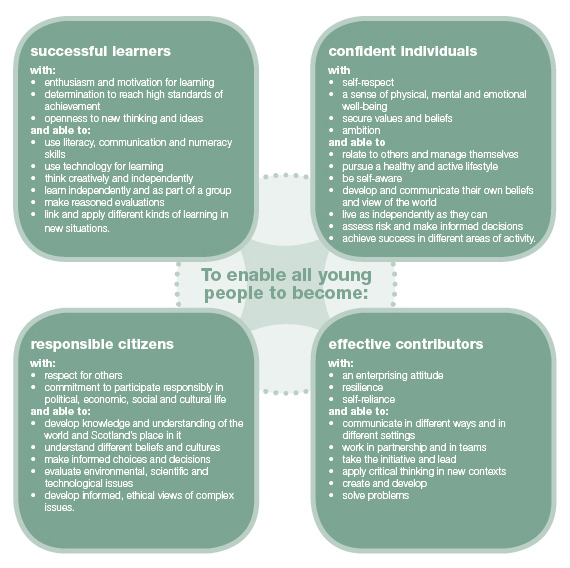 The four ‘capacities’ of the Scottish curriculum.

Footnote: The day after I published this blogpost, I was alerted to the publication of ‘A Common Weal Education‘ from the Jimmy Reid Foundation. I had no idea that it was being written, but an added bonus is that it was written by Brian Boyd, Emeritus Professor at Strathclyde University and one of the most positive influences on Scottish Education over the past two decades. If you have any interest in the future of education in Scotland – or anywhere else for that matter – I could not recommend this report highly enough.