It was once said that a million monkeys typing on a million typewriters for a million years would eventually produce the works of Shakespeare, but what if you gave them a movie camera? How many times have you seen a film and said, “I could do better than that”? Well here’s your chance to put your money where your mouth is and see how many people want to watch your movie!

Filmmakers (D-Media) and Film Fans (Close-Up Film) have come together to challenge our perceptions of how great movie ideas are born, and are using social media to ‘crowd-source’ the next big cinema hit. Launched on 6th December, the project will run over three months, with entrants first building up support for their movie concept. Open to amateur and professional filmmakers alike, voting begins on 1st February 2012 and thereafter no new projects can be submitted to the site. Voters can vote for as many of the pitches as they like, but only once for each idea. The leader board will show the top ten projects each week.

How does it work?

The more interest you attract, the higher you move up the leader board. Ultimately, the concept with the most fans wins.

Cost of entry is just £30. For this, you will have your own page on the Millionth Monkey’s Movie website, your work showcased to over 100,000 people, online resources,  access to film industry professionals and, of course, the chance of having your film made and seen.

The Winner will pick up two thirds of the net money received from the entry fees for the competition and the  support of D-Media in having the film produced, starting with a tour of the facilities at Pinewood Studios. Gina Fegan (The Tournament, Devil’s Playground) will also be appointed executive producer of the film to support the project. 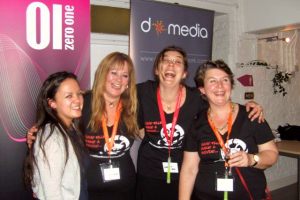 The team behind the Millionth Monkey concept

The Runner-Up will win a tour of Pinewood Studios, including an industry lunch, and one day with D-Media and Close-Up to develop a realistic outline of how to take the project further.

The Weekly Winner, will be profiled on the weekly leader board and will win two cinema tickets.
To find out more and enter the competition, visit: www.millionthmonkeysmovie.com

I came upon this really interesting free movie-making software today, and I have been messing about with it to see what it can do. There seems to be an increasing number of these apparently frivolous sites which appeal to the frustrated Spielberg or Scorsese in all of us, some more compicated than others. What I like about Xtranormal is that it is simple to pick up and start using immediately, even for the most technically-challenged adult like myself. Based on the popular ‘freemium’ model, whereby you have access to the basic templates free, you start paying when you want more control of a bigger range of characters, settings and camera functions, although even then the charges don’t look prohibitive. I can immediately see the potential for this little tool in the secondary classroom (young people must be aged 13 and over to open an account), with kids bringing their own stories to life in the ‘text-to-movie’ module, or as a means of transcribing an existing text into the scriptwriting text boxes before ‘directing’ the movie version of their favourite story. Seems to me that however you might use it, the end result would be an increased understanding of the elements which combine to make a succesful story. I’m sure you’ll recognise my unoriginal script!